Warm Up Activities at GooglePlex

On the second day  of  the Doodle4Google event, we were  picked up by a bus  arranged by Google from our hotel to the Googleplex.  The group were separated accoprding to the categories they were in.  Google representatives have prepared activities for the kids to do. 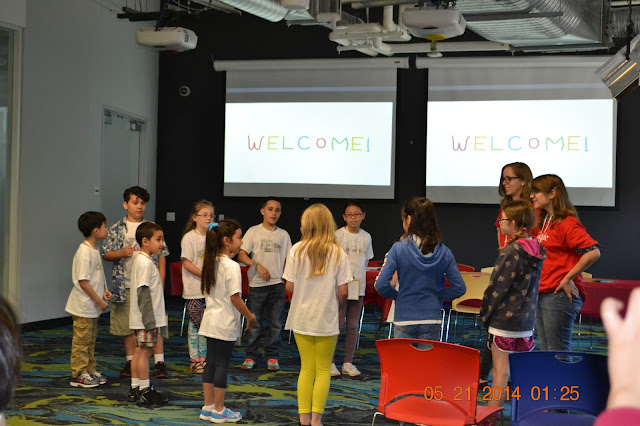 When we reached the   room that was assigned for the group. To shake off the nerves that kids had, they did a warm up activity. 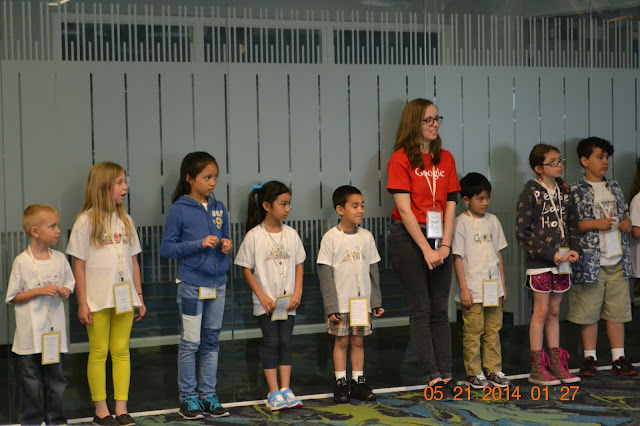 I am so glad that my son was able to participate in everything that his sister did.  It made him feel that he belong there. I am very grateful to Google for accomodating the extra family members who came for the event. 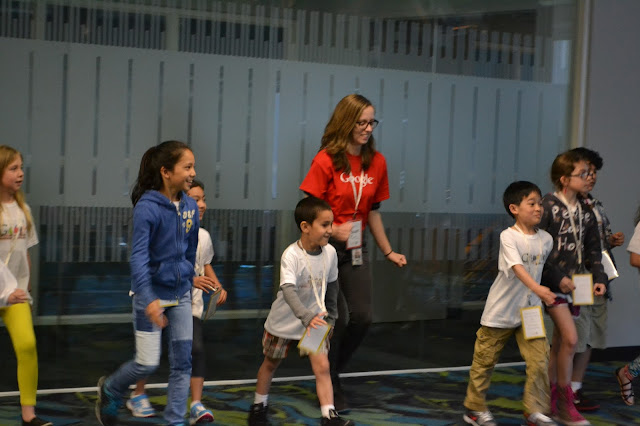 They did so many workshops through out the  day  which I will post in the next coming weeks if I get the chance.  This  has been over a year ago but I honestly don't have time to post everything that I want. 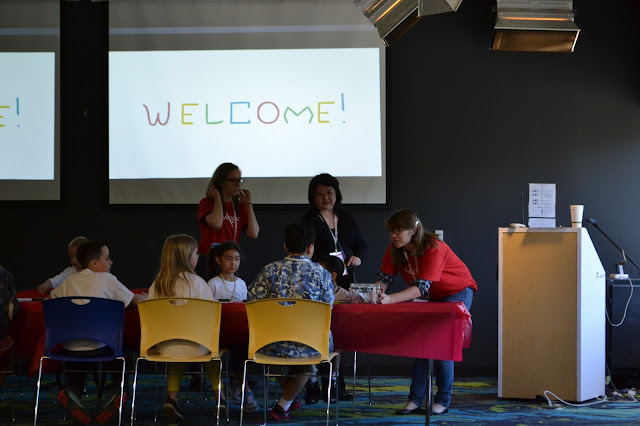 /Tune in next time for the other activities that they did.  Thanks for leaving your comments.
at June 25, 2015 No comments:

Email ThisBlogThis!Share to TwitterShare to FacebookShare to Pinterest
Labels: Doodle4Google

The city of Amsterdam is rich in history, museums, and interesting architecture. However, when traveling overseas, expense is often a concern. In addition to taking measures to save money on hotels in amsterdam, travelers who are on a tight budget should also seek out free and inexpensive attractions. Fortunately, the city has many sites that fall under both categories.

Known as one of the busiest and most famous markets in Europe, Albert Cuyp Market attracts thousands of visitors daily. With more than 300 stalls, visitors may shop for fresh produce, clothing, and everyday items at some of the cheapest prices in the city.

Museum of the Canals

The 17th century canals are located in the city center and are featured on the UNESCO World Heritage List. The museum is considered to be the gateway to the canals. Families may stroll along the canal street free of charge, or they may opt to visit the museum. When purchased online, ticket prices from 10 Euros for adults to five Euros for children age six and older. Children under age six are admitted free of charge.

The University of Vrije owns a botanical garden that houses more than 6,000 species of plants. Many of the plants are endangered varieties that have been seized by customs. In addition to being a calm place where visitors can walk around and observe the plant varieties, the garden also hosts workshops and concerts.

Visitors can take a free ferry across Amsterdam's major waterway into the neighborhood of Noord. Similar to Berlin, the area has emerged as a contemporary hub for an eclectic arts scene. Families can take in unusual sights like the old submarine that rests in the harbor and rusted trams that can be found on the streets. Ferries to Noord depart from behind Centraal Station.

There are plenty of opportunity to take in the overall tranquil atmosphere of the Netherlands' most famous city without breaking the bank. From gardens to vestiges from the past, which can be found in the most unexpected places, travelers will have no shortage of inexpensive sites to visit.
at June 25, 2015 No comments: 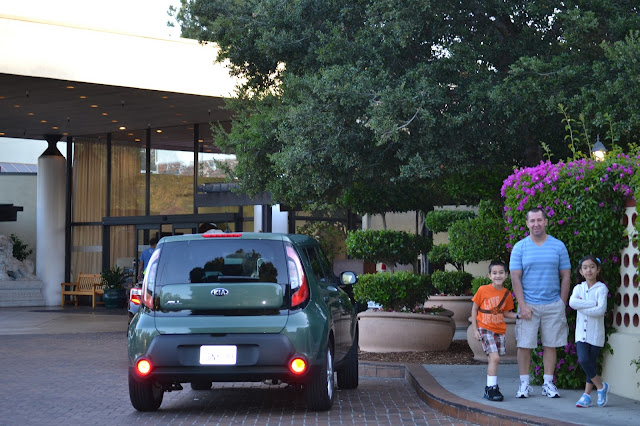 There are so many beautiful places in the world that planning where to go on a family vacation can be a tough decision to make. Adults generally have their own ideas about what constitutes the perfect vacation whereas kids often have different wants and needs. As an adult, you might fancy the idea of spending a couple of weeks relaxing on a beach somewhere hot and tropical while your kids are clamoring to go to Disney in Florida. But wherever you decide to go, be it a Costa Rica luxury villa or New York City break, what type of accommodation is best suited to families? 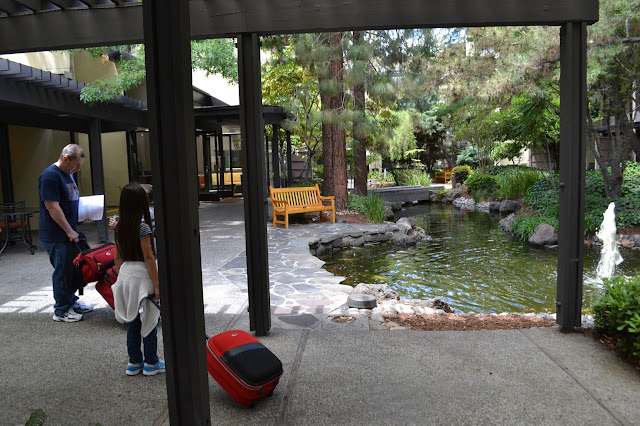 For most families, the overriding consideration will be their budget. Unless you have money to burn, you will probably be constrained by how much cash you can afford to spend on the accommodation component of your family vacation. Staying in a resort hotel or renting a villa or condo is going to be enjoyable, but if you have young children, and lots of them, it might be wiser to look at alternatives such as camping or budget motels. 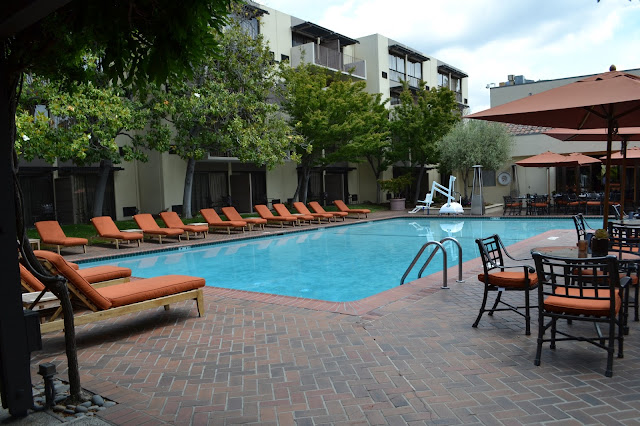 Who doesn’t love an all-inclusive vacation deal in a luxurious resort hotel somewhere hot and tropical? If you can afford it, this type of vacation really is top of the must-do list. Once you have checked into a luxury resort hotel on an all-inclusive deal, everything is free: food, drinks, snacks, cocktails, and anything else you want. All-inclusive deals are also useful if you are on a limited budget – once you have paid for the vacation, you won’t need to worry about running out of cash while you are away as everything is paid for. 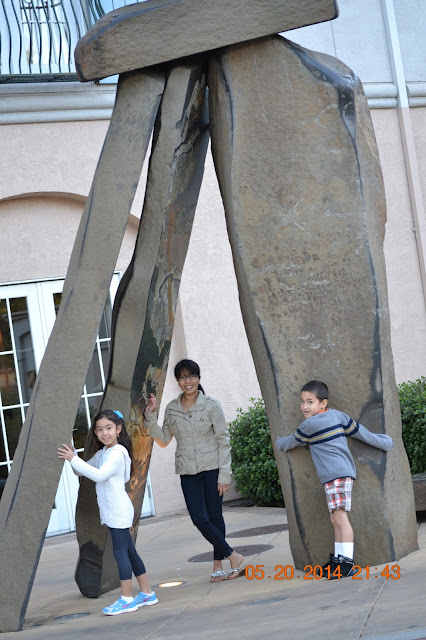 When it comes to flexible living, a villa really comes its own. Staying in a private villa means you are free to come and go as you please, without upsetting other guests in the next room. If you want to stay in bed until noon, that’s okay. Or, if you have children, you can prepare their meals at times to suit them, not the hotel staff.

Resort hotels and villas can be equally relaxing, but when it comes to privacy, a villa is a better choice. The main problem with staying in a resort hotel is that you are always surrounded by other guests, many of whom might snap up the prime positions around the swimming pool. Renting a villa means you don’t have to worry about noisy guests, other people’s annoying children and a lack of sun beds. You will have to make your own cocktails, however, so bear this in mind.

The More the Merrier!

Staying in a self-catering villa is more economical if you have a larger family. There is usually a limit on the number of people per room in a resort hotel, so you may be forced to pay for more than one room, which can be expensive.


If you are not sure which accommodation option is the right one for you, make a list and weigh up the pros and cons before you decide.
at June 25, 2015 No comments:

Roadtrip after the 4th of July

Last year, we made a mistake of going on a road trip the day after the  4th of July.  Our destination was Ocean City and we didn't thought that many people are heading to the beach  as well. We were stuck in the congested traffic in Maryland.  I think we were sitting there for  almost three hours and it was tough especially if you have  kids  traveling with you. 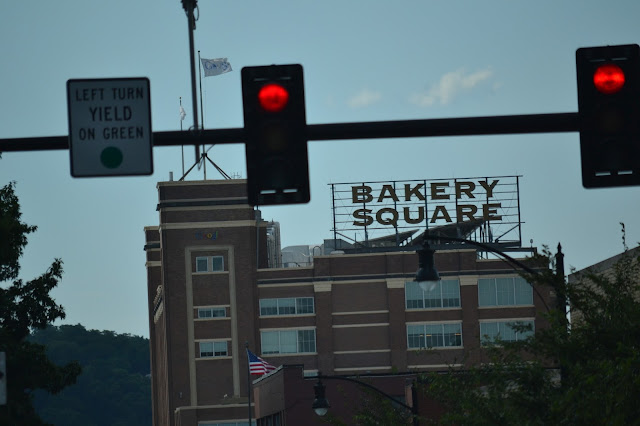 We didn't use the full 6 days that we have booked because we were bored already after   4 days of going back and forth in the ocean and in the  amusement park there.  So on the fifth day, we decided to come back even though we already paid  for another two days in the hotel.  No, we didn't get a refund but it was okay, we want to come home already. 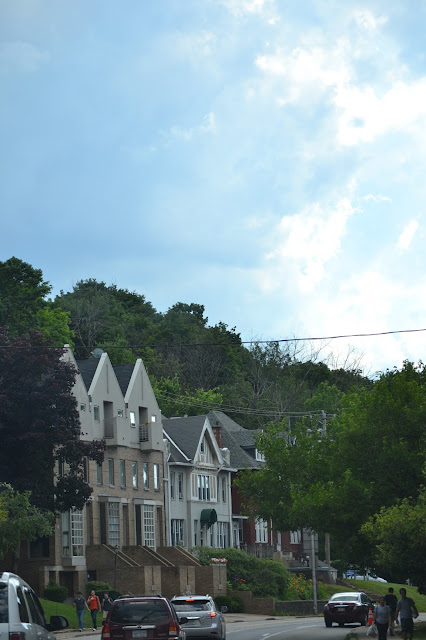 Coming back, we were again hit by the same luck with traffic in Pittsburgh.  We were so  bummed and the heat of the sun wasn't helping  either even though we have an air condition on  in the van. 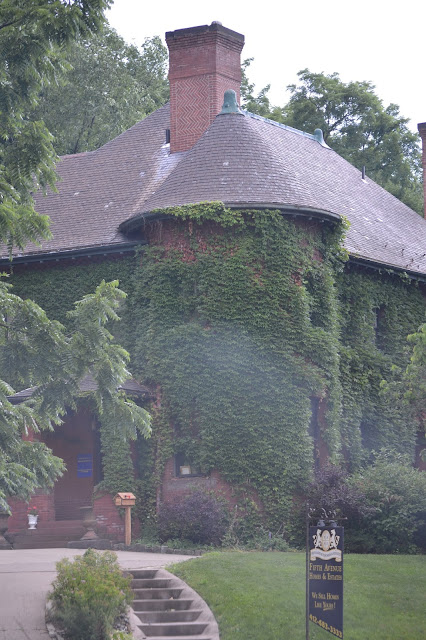 To divert my   call of nature feeling, I  just  started taking pictures.  The GPS took us where we have never driven before in Pittsburgh so it was  kind of new to me. 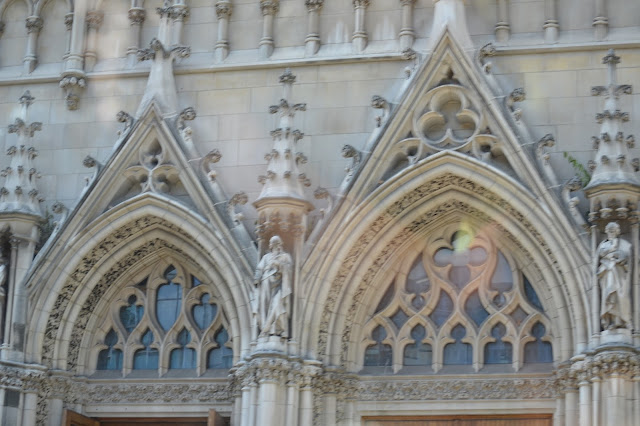 I just busied myself  taking photos of the beautifully  designed  architectural buildings.  I find it fascinating how ornate  these old buildings are. 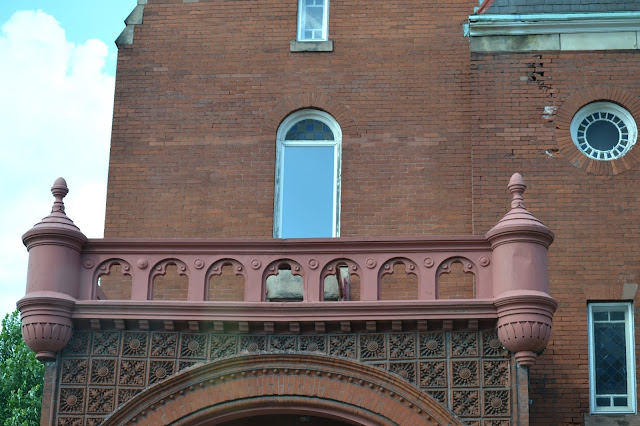 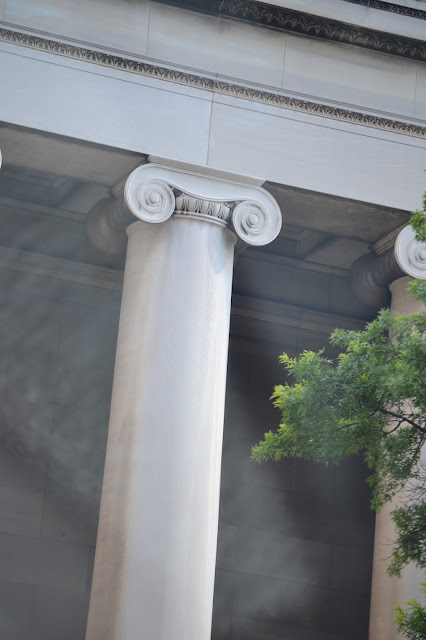 There's so much to enjoy  in big cities like Pittsburgh.  Being stuck in a traffic is not a bad thing sometimes.  You just have to make use of the time you have while the car is sitting in the middle of the road. 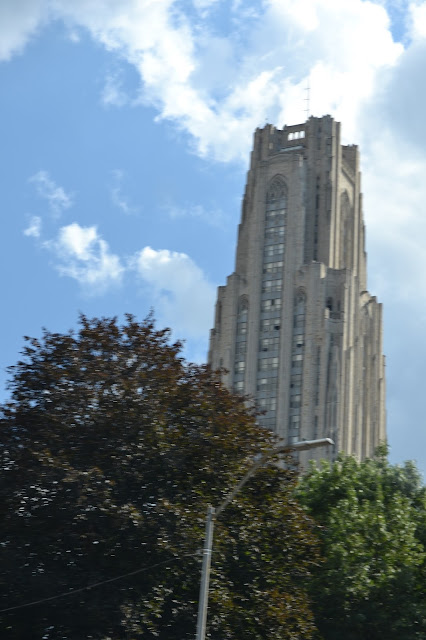 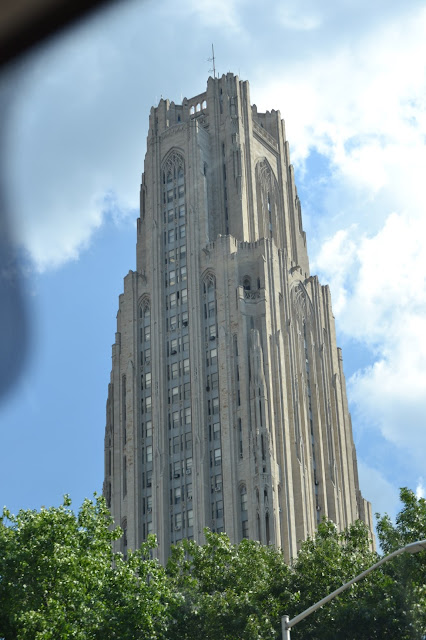 I think if I live in Pittsburgh, I would spend a day or two  just walk all around the city, take photos  of the beauty that surrounds the  city of bridges. 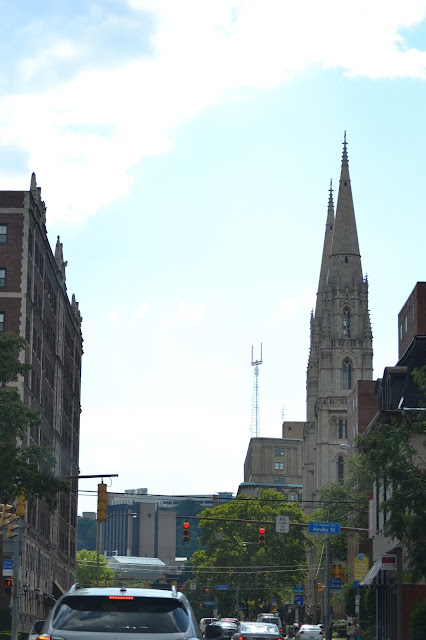 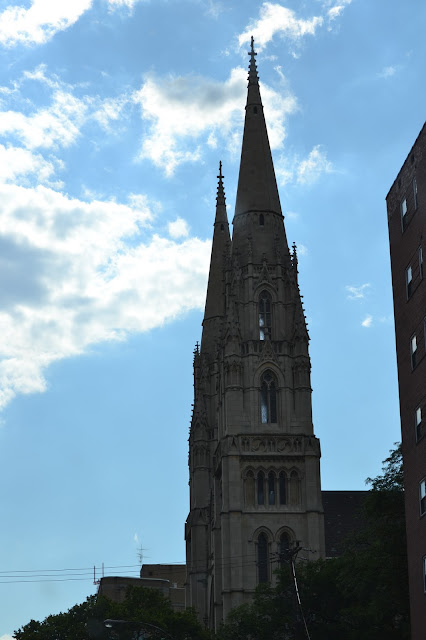 This year, we are going on a road trip again, this time we are going to Virginia Beach and  nope, we are not leaving right after the  4th of July.  We chose not to lol.  I actually told our friend who is leaving  to go to Myrtle Beach the same day that we did last year.  I told her good luck and hope that they don't hit any traffic.
at June 15, 2015 No comments:

Rehearsal Before the Music Recital

The day before the music recital, Torrance Music had the rehearsal at  Memorial Baptist Church.  I was able to talk to the owner of the studio and asked her about  violin lesson.  Unfortunately, the teacher she hired no longer teaches it since it is a far drive from her city to our city.  She then recommended for me to call someone that she knows who teached violin lesson for  a  much lower cost.  So now, my daughter changed her  mind about learning how to  play a flue in the school but rather wants to take the violin lesson that the school is offering.  I think it's a great idea too.  So instead of buying flute and  high flutin, we will be buying violin if she starts  attending the  class in school.